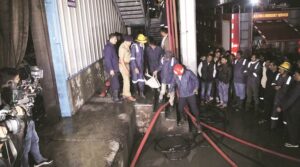 Seven people reportedly died in a garment factory fire in India in February, according to reports from local news sources. On the Saturday night, the Nandan Denim factory in Ahmedabad caught fire, which raged through Sunday morning. According to a 2018/2019 annual report, the factory works with a number of major brands, including Ann Taylor, Zara, Ralph Lauren and Polo, and Target.

The Indian Express reports that the fire started in the shirting part of the factory, where there was no ventilation. The cause of the fire is still unknown, but police reportedly said that a preliminary probe revealed there was only one exit on the first floor, which was accessible only by a ladder, and there were no fire safety measures in place. A representative from the Labour and Employment Department said that the factory would be closed until further review of the safety initiatives in place.

While it’s rare, it’s not unheard of for garment workers to die while on the job. In December, a fire at a handbag factory in Delhi killed 43 workers, and the 2013 collapse of Rana Plaza in Bangladesh killed over 1,000 garment workers. The Nandan factory has certifications from eco-friendly groups like the Better Cotton Initiative, Global Organic Textile Standard, and Oeko-Tex, though those primarily certify the safety of the chemicals used in manufacturing. Nandan’s annual report has a “Social, Health, and Safety” section that reads, “Our goal remains to achieve ‘zero fatality’ and we are committed to achieving this through the effective management of health and safety risks.” Police are still investigating the factors which led to the accident.