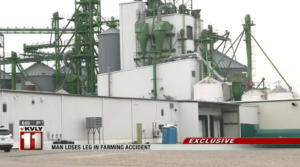 Fargo, ND – The Occupational Safety and Health Administration (OSHA) has begun investigating Red River Commodities, a Fargo agricultural company, after an employee suffered an injury that resulted in losing his leg.

The worker involved in this incident was Aaron Maves, 31, who had to wait nearly 40 minutes in pain while emergency responders worked to free him.

Maves leg was caught when he sweeping around the auger of a grain bin. He said his colleague’s quick thinking saved his life. Though unexpected accidents happen, grain bin related injuries and death are more preventable with proper training.

Since January 2018, Red River Commodities has roughly paid $25,700 in fines towards OSHA for other incidents, including one incident where an employee unfortunately was killed after being struck by a forklift while they were sweeping. OSHA cited Red River Commodities for at least eight violations committed in 2018.