Glastonbury, CT – An employee at EDAC Technologies had to be rescued after becoming caught in machinery while on the job. The worker was transported via helicopter to receive medical care for serious injuries to his legs as a result of the industrial accident earlier this week.

The injured worker is reported to be a 58-year-old male employed by EDAC Technologies, an aerospace and defense manufacturing facility. According to local police, he became stuck inside an industrial CNC vertical turning center and was seriously injured as a result. It took area firefighters over 30 minutes to extract the worker from the machine, after which he was taken by helicopter to the local hospital for treatment.

Other reports of the accident claim that the worker fell into the industrial lathe machine and “sustained serious injuries to the lower extremities” as a result. At this time, 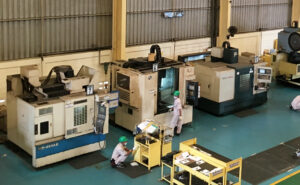 the man’s name and condition have not released and there have been no updates as to the cause of the fall or entrapment that lead to the injury. OSHA has been informed and will be conducting an investigation into the accident.

EDAC Technologies is an aerospace parts company specializing in the manufacture of large diameter, thin-walled cases that are used in aerospace, defense, and turbine industries.