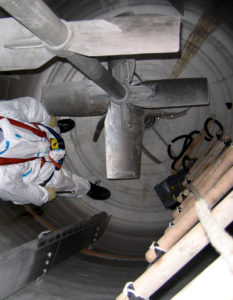 Auburn, New South Wales – Craig Tanner (42), father of three, was killed in a tragic lockout accident at an industrial ink manufacturer in West Sydney, Australia. Two other workers were hospitalized after also being trapped in the vat of ink. The three workers were cleaning the ink vat as part of a routine maintenance check when they became stuck at the DIC Australia Ink factory.

The men became trapped when a mixing blade unexpectedly started up while the tank was being cleaned at the factory. Tanner was working at DIC as a contractor. He was inside and cleaning the tank when the blade started moving and cut into his legs.

The vat was a cylinder shape, about 26 feet high with a mixing blade inside. Rescuers used manhole access at the bottom of the of the confined space to reach the workers. “Ink slush” at the bottom of the vat plus the confined nature of the space made the rescue extremely difficult. It took four hours to free the men who were covered in black ink, which further complicated their rescue and treatment.

A thorough investigation will be made to identify cause(s) of the accident, with special attention paid to how the mixing arm of the large vat accidentally switched on when the men were inside it at the time.