49-year-old Marion Fletcher was killed at the Jeffersonville (IN) facility on February 20th while reportedly wearing a long-sleeved shirt with “unrestrained” hair at the time of the accident. OSHA found that the machinery Fletcher was operating was not properly 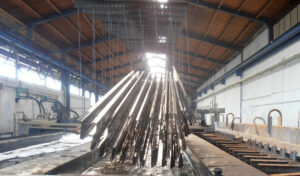 guarded to prevent employees from getting caught during its cycle.

Emergency crews arrived at the Valmont facility in response to a call about an industrial accident and an unconscious and unresponsive worker. Fletcher showed no signs of life when he arrived at the hospital, despite the best efforts of emergency responders. Marion Fletcher had reportedly been employed by Valmont for nine months prior to the fatal accident.

For it’s part in the accident, Valmont was issued two violations. Each safety violation was deemed “serious” and carries a penalty of $7,000. Valmont specializes in hot-dip galvanizing and protective coatings for steel.

The importance of machine guarding and employee safety training cannot be overemphasized. Accidents such as this serve as an unfortunate reminder for us all. Please call an industrial safety specialist at Martin Technical today if you have any concerns about the safety of machines in your workplace.